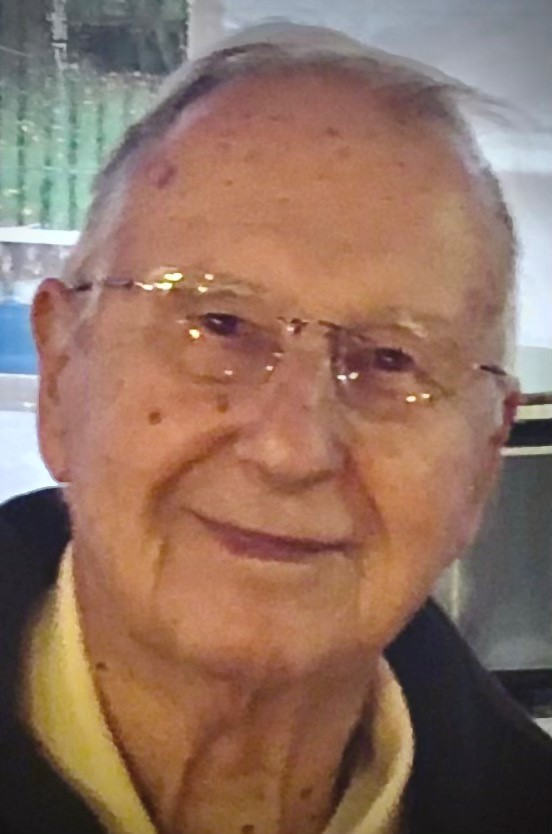 Please share a memory of Ronald to include in a keepsake book for family and friends.
View Tribute Book
RONALD F. LANSING Ronald F. Lansing, 90 of Latham, beloved husband of Margaret Mary Lansing (McGeough) for over 65 years entered into eternal life after a brief illness on July 23, 2021 at the Albany Stratton VA Medical Center. Ron would like to let you know that his work here is done. He received an important call, sort of an offer you can't refuse. The offer comes with a reunion of many family members and friends. His new mission takes him to a wonderful place where he will be playing golf and socializing to his heart's content. He made a difference in the lives of many. Born in North Albany, he was the son of Walter and Aniela Lansing. Ron graduated from Albany High School after attending Christian Brothers Academy for two years. He later went on to graduate from Hudson Valley Community College with an Associate degree in Mechanical Technology. At age 21 in March 1952, Ron served proudly on active duty in the United States Army for two years during the Korean War. He was stationed with the artillery unit of the 3rd Infantry Division. At age 24 in September 1955, Ron married Margaret McGeough and the two shared a blessed marriage. Their three children were born in 1958, 1960, and 1962. During his working career, Ron was employed as an architect's representative for various local and out-of-state firms, eventually retiring from the building and facilities division of the Rutgers School of Medicine and Dentistry in New Jersey and the building and facilities division of Rensselaer Polytechnic Institute in Troy NY. Active in community and church (Our Lady of the Assumption in Latham), he was also a member of the Colonie Knights of Columbus. Ron was a skilled golfer who played into his late 80s. He even scored a hole-in-one in the 1970s. It was a very foggy morning on the long par 3 at Western Turnpike Golf Course when Ron teed off with a Titleist 2 ball and then exclaimed "I think it went in!" His good friend Alex McDonald had previously teed off, also with a Titleist 2. Alex said he thought Ron's ball had rolled off the back of the green. When they got to green, a Titleist 2 was in the cup. A friendly back-and-forth ensued that would last for decades. But it was decided that Ron's ball had found the mark. Ron and Marge enjoyed traveling and spending time with family and friends. Ron was known for his ability to plan next year's Thanksgiving dinner while simultaneously enjoying this year's feast. His children, grandchildren, and great grandchildren were "chips off the old block," but only when they did something good. Survivors, in addition to his wife Marge, are his loving children Kevin (Sonja Myhre), Michael (Elizabeth), Jacqueline (Jeffrey Crannell), his grandchildren, Michael Jr., Ryan, Rachael, Joshua, Julia, Krister, Scout, and Karsten, and his great grandchildren Jack, Mia, Piper, and Michael III. He is also survived by his sister Sandra Dunphy and her husband Charles, as well as many nieces and nephews. His was predeceased by his older brother Walter. Relatives and friends are invited to visit on Sunday August 8, 2021 from 2-4pm at the Dufresne & Cavanaugh Funeral Home, 149 Old Loudon Rd., Latham. A mass of Christian Burial will be held on Monday, August 9, 2021 at 10am at Our Lady of the Assumption Church, with the Reverend Geoffrey Burke officiating. Internment with full military honors will be at the Gerald B.H. Solomon Saratoga National Cemetery on Monday August 9 at 12:30pm. In lieu of flowers, memorial donations may be made to the Albany Stratton VA Medical Center at 113 Holland Avenue, Albany, NY 12208 or https://www.albany.va.gov/giving/index.asp or any veteran organization of choice. For directions, information, to light a memory candle or order flowers for the family please visit www.dufresneandcavanaugh.com.
To send flowers to the family or plant a tree in memory of Ronald Lansing, please visit Tribute Store
Sunday
8
August

Share Your Memory of
Ronald
Upload Your Memory View All Memories
Be the first to upload a memory!
Share A Memory
Send Flowers
Plant a Tree