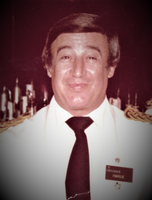 CARMELO A. "CHARLIE" ALFANO LATHAM – Carmelo A. "Charlie" Alfano, 86 of Latham, passed away on August 1st, 2022 at St. Peter's Hospice Inn in Albany. Born in Albany on June 15, 1936, he was the son of the late Guiseppe "Joe" and Bessie (Motta) Alfano. Charlie was educated at St. John's Academy in the South End of Albany. He proudly served in the National Guard, during the Korean War. Charlie worked as an Iron Worker as well as a Laborer with the Laborers Union Local #190 for many years. He relocated to Southeast Florida in 1963 returning to the Capital District in 2010. While in Florida he worked as a bartender, manager, representative and organizer for the Restaurant & Bartenders Union Local #355 in Miami Beach. Charlie fulfilled his dream and great love for his Sicilian heritage when he travelled to Sicily in 2004. Throughout his life he followed thoroughbred racing at many racetracks and also enjoyed visiting casinos. He enjoyed all sports and was a lifelong avid NY Yankees, NY Giants, and NY Knicks fan. He also enjoyed following the Miami Dolphins and Heat. Charlie was a communicant of Our Lady of the Assumption Church, a 3rd Degree Knight of Columbus Council #3394, Latham as well as a member of the K of C Dart League. In addition to his parents Charlie is predeceased by his son Anthony C. Alfano, his brothers Orazio and Tindaro, and great-grandson Logan. He is survived by his son Michael Alfano, 5 grandchildren, and his sisters Josephine Alfano Shea and Mary Jean Alfano as well as many nieces, nephews, and cousins. In keeping with Charlie's wishes there will be no visitation. A memorial mass will be held at Our Lady of the Assumption Church at a future date and time to be announced. Charlie's family wishes to thank the staff at St. Peter's Hospice Inn for their loving care, Fr. Geoffrey Burke for his visits and prayers as well as special friends Sharon Opitz-Brown and Al Durant for their friendship and continual support. In lieu of flowers memorial contributions may be made to the charity of one's choice. For information or to light a memory candle for the family please visit www.dufresneandcavanaugh.com.