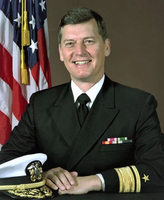 MARTIN W. LEUKHARDT (RADM, USNR (RET)) LATHAM - Martin W. Leukhardt, 86, of Latham, beloved husband of Milena Leukhardt nee Kovar, entered into eternal rest on Sunday, January 16, 2022. Born in Endicott, NY on May 17, 1935, he was the son of the late Martin and Elsa H. (Konzack) Leukhardt. Martin and his beloved wife Milena were married on November 1, 1957 in Newport, RI. Martin attended Endicott schools, graduating from Union-Endicott High School in 1953. He went on to attain his bachelor's degree from SUNY Oswego and his master's degree and post MS hours at the University of Illinois and SUNY Albany. Martin was commissioned as an officer in the US Navy, in 1957, upon completion of Officer Candidate School in Newport, RI. He served on active duty for over five years with the Florida Group of the Atlantic Reserve Fleet (MDAP) as well as with the Naval War College in Newport, RI. From there Martin would continue his naval service with the Naval Reserves serving in many leadership positions and being awarded distinctions and honors to include Legion of Merit, Defense Meritorious Service Medal, and Navy Commendation Medal. He was honorably discharged from the Naval Reserves on October 1, 1991 with over thirty-four years of dedicated service. From 1964 to 1966 Martin taught in the Binghamton City School District and at SUNY Oswego. In 1966 he joined NYS United Teachers (NYSUT) in Albany. At NYSUT, he worked as a field representative and other high-profile roles including Senior Labor Relations Specialist where he prepared and made presentations to organizations including the National Labor Relations Board, New York Public Employment Relations Board, and other government agencies. Martin retired from NYSUT in 1996 with thirty years of distinguished service. Martin enjoyed traveling, architecture, history, reading, and gardening. He was also a Free & Accepted Mason and a model railroad enthusiast. Out of all of Martin's hobbies and interests that brought him joy in this world, nothing compared to the love he had for his family. He was a devoted husband, loving father, and cherished grandfather and great-grandfather. He will be forever missed and eternally cherished by all who knew and loved him. In addition to his wife, Milena, Martin is survived by his three children: Martin F. (Fran) Leukhardt, Carla J. (Terry) Fairfield, and Laura J. (Phil) Legore as well as his grandchildren: Michael (Lois), Jessica (Ben), Terry, Patrick (Alexandra), Brian (Emily), and Anthony. Martin is also survived by eight great-grandchildren. In addition to his parents Martin is predeceased by his sister, Irma Felice. Services will be private at this time. Martin will be laid to rest with full military honors at the Saratoga National Cemetery. His family wishes for relatives and friends to be able to safely gather at a future celebration of Martin's life, date and time to be announced in the future. Arrangements have been entrusted to Dufresne & Cavanaugh Funeral Home. In lieu of flowers, memorial donations may be made to the Capital City Rescue Mission at give.capitalcityrescuemission.org/give or mailed to 259 S Pearl St, Albany, NY 12202. For information, or to light a memory candle for the family, please visit www.dufresneandcavanaugh.com.