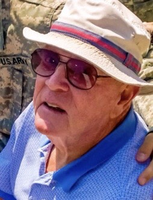 Galway-Richard T. Wayand, 85, passed away peacefully in the presence of his family on Tuesday, March 16. He was born in Schenectady, NY and was a 1953 graduate of Scotia-Glenville High School. The son of William and Pearl Wayand, Richard worked as a draftsman at the General Electric in Schenectady prior to entering the New York State Police Academy and becoming a NYS Trooper in 1957. Early in his career, he was drafted into the US Army as a MP for two years stationed at Fort Dix, NJ. After being honorably discharged from the military, he continued his 35 year career with the NYS Police, retiring as a Senior Investigator in the Bureau of Criminal Investigation (BCI). Richard is survived by his wife of 62 years, Gail, his children, Karen (John) Mantas, Charles (Gina) Wayand, Robin (Dave) Renko, and Tracy (Tom) Petricca and his grandchildren, James and John Mantas, Mitchel and Sydney Wayand, Matthew and David Renko, and Nicholas Petricca. There will be a private service, date to be determined, at the Gerald B.H. Solomon Saratoga National Cemetery. For directions, information or to light a memory candle for the family please visit www.dufresneandcavanaugh.com.