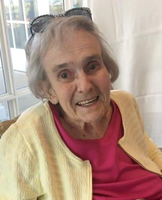 Susan E. Gladding Brown Susan Elizabeth Gladding Brown, 84, of Latham, died peacefully Thursday, her loving husband, Al, at her side and her eldest daughter, Cathy, waiting to embrace her above. Sue was born April 30, 1936, in Albany, daughter of the late Charles and Rosella Gill Gladding. She grew up on Marshall Street in the South End, the youngest of four children. She graduated from Albany High School and later from the College of St. Rose, where she earned bachelor's and master's degrees in English—a proud Golden Rose, and the first in her family to obtain a college degree. It was at St. Rose where she formed a lasting bond with Phyllis Cooney, Marie Hogan and Rosemary Myers. It was also where Phyllis and her then-boyfriend (now husband) Paul Cooney decided that their best friends, Sue Gladding and Al Brown, should go out on a blind date. It was a match that thrived for more than six decades: Sue and Al were married at St. Vincent de Paul Church in Albany on Feb. 7, 1959. After a brief teaching career, Sue joined Al to raise 10 children, spending several years in Albany, Crescent, Plattsburgh, Oneonta and Goshen, before returning to the Albany area in 1981. While leading all those moves and managing a growing and loving home, Sue still found time to involve herself deeply in her children's education and extracurricular activities, spending numerous hours volunteering at school and outside activities, including Girl Scout camping trips, bowling outings, book fairs, fund-raisers, and many, many others. A lifelong learner with stacks of books at her side, she had a passion for reading which she instilled in all of her children, and later her grandchildren. It was a moment of pure delight for many of her grandchildren when the newest Harry Potter book magically appeared on their doorsteps, courtesy of Grandma Brown. She also tried to show her children and grandchildren—with mixed success—how to toss a bowling ball with a nice hook. Sue also cared greatly about her community, volunteering at organizations such as St. Joseph's Food Pantry, Mercy House and Community Maternity Services in Albany, as well as Birthright in Albany, where she was known as a premier baby-holder—a favorite activity and skill she continued with her grandchildren and great-grandchildren. She was also an early champion of Farano House, now known as the Farano Center for Children. A longtime parishioner of St. Pius X Church in Loudonville, Sue was an ardent advocate of Catholic education, serving many years as a member and later President of the St. Pius X School Board of Education, where she pioneered fund-raising efforts that helped grow enrollment and make the school accessible for more families. In a memorable moment that garnered local media attention, she helped mobilize a successful community protest in the 1970s to keep St. Mary's Catholic School in Waterford from closing. Sue and Al continued their support for Catholic schools in the Albany Diocese for many years, providing funding for numerous school programs, books, supplies and building repairs, such as libraries at St. Pius X in Loudonville and St. Mary's in Waterford, each named in memory of their daughter, Catherine Mary Brown, who died in 1969. In 2010, the Albany Diocese honored them for their years of dedicated support of Catholic education. In her later years, Sue also took a great interest in travel and genealogy, venturing several times to Europe, where she traced her father's World War I service through Eastern France, took in the beauty of The Vatican, and discovered ancestors who came to America, she liked to quip, "right after the Mayflower." Sue and Al spent the last 20 winters in Central Florida, where she regularly enjoyed taking her grandchildren and great-grandchildren to Walt Disney World, giving them—and her—a special place for making memories. Throughout her life, her generous spirit, intelligent insight, strong faith, and devotion to family, sprinkled with a sense of wit and whimsy, were welcome beacons to family and friends alike who often sought her counsel—usually over a cup of tea or a glass of sherry. Survivors in addition to her husband, Albert J. Brown, Jr., of Latham, include her nine children: Margaret Brown of Cohoes, Patricia Derocher (Bob) of Loudonville, Jennifer Horn (Bill) of York Harbor, Me., Cynthia Brandolini (Joe) of Gastonia, NC, Matthew Brown (Julie) of Harrington Park, NJ, Anita Mahon (Ken) of Budd Lake, NJ, Andrew Brown (Julie) of Pearl River, NY, Carolyn Ustin (Mark) of Albany, and Elizabeth Goyette (Chris) of Latham; 34 grandchildren (and three spouses); three great-grandchildren; and many nieces, nephews, and brothers and sisters-in-law. In addition to her parents and daughter, she was predeceased by three brothers, Charles (Dick), William and Jack Gladding. A Catholic Rite of Committal will be held on Tuesday, June 2, at 1 p.m. at St. Mary's Cemetery, Middletown Road, Waterford, with burial immediately afterward. Memorial contributions may be made to the Diocese of Albany Catholic Schools COVID-19 Tuition Relief Fund (https://tinyurl.com/COVID19tuitionrelief), or Farano Center for Children, via Catholic Charities-Community Maternity Services (https://www.cccms.org/). Her family also wishes to thank Fr. Michael Farano for his decades of friendship and presence through Sue's final weeks, as the many caregivers who provided so much comfort and support to Sue over the last two years. For directions, information or to light a memory candle for the family please visit www.dufresneandcavanaugh.com.